Queen Margaret University is a university, founded in 1875 and located on the outskirts of Musselburgh, Scotland. It is named after Saint Margaret, wife of King Malcolm III of Scotland.

Before moving to a new campus just outside Musselburgh, Queen Margaret University had been based in campuses in Corstorphine (to the West of Edinburgh), in Leith, and at the Gateway Theatre – Scotland’s International Drama Centre – (a former television studio previously owned by Scottish Television) on Elm Row, Leith Walk. 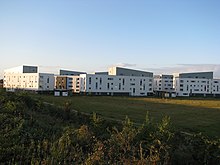 Student accommodation at the Musselburgh campus.

In 2007–2008, the university brought together students from its three campuses in Edinburgh by moving to a new purpose-built campus near Musselburgh, East Lothian. Costing £100 million, the new campus covers 35 acres (14 hectares) and holds educational buildings, a students union, a small gym and halls of residence of more than 800 rooms.

QMU has been “touted as the country’s greenest University campus”.[8] The campus was designed by Dyer Architects to exceed current environmental standards and sets a new benchmark in sustainable design. The entire development transformed a 35-acre (14-hectare) site from low-grade farmland into landscaped parkland.

In June 2015, Queen Margaret University, Edinburgh announced it would hold public consultations for plans to build a new innovation park and shopping hub on open land around the Musselburgh campus. Site proposals are being developed by CAM-SCI, a Cambridge-based economic consultancy, which has developed science parks across the UK.

The Learning Resource Centre (LRC) comprises approximately 4,500 square metres (0.45 hectares) of the main academic building. Located at the heart of the campus, it provides library, IT and AV services to students, staff and visitors of the university. The LRC consists of a facility for both directed and self-directed study, based on an integrated library and information service provision. The LRC has 1,000 study spaces organised as a mixture of silent and group study areas, bookable group study rooms, training rooms, assistive technology, student learning support and a postgraduate study room.