Royal Holloway, University of London (RHUL), formally incorporated as Royal Holloway and Bedford New College, is a public research university and a constituent college of the federal University of London. It has six schools, 21 academic departments and approximately 10,500 undergraduate and postgraduate students from over 100 countries.[4] The campus is located west of Egham, Surrey, 19 miles (31 km) from central London.

The Egham campus was founded in 1879 by the Victorian entrepreneur and philanthropist Thomas Holloway. Royal Holloway College was officially opened in 1886 by Queen Victoria as an all-women college. It became a member of the University of London in 1900. In 1945, the college admitted male postgraduate students, and in 1965, around 100 of the first male undergraduates.[5] In 1985, Royal Holloway merged with Bedford College (another former all-women’s college in London). The merged college was named Royal Holloway and Bedford New College (RHBNC), this remaining the official registered name of the college by Act of Parliament. The campus is dominated by the Founder’s Building, a Grade I listed red-brick building modelled on the Château de Chambord of the Loire Valley, France. The annual income of the institution for 2020–21 was £189.9 million of which £18.8 million was from research grants and contracts, with an expenditure of £179.2 million. 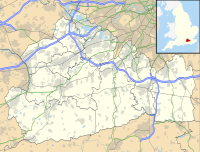 Royal Holloway’s campus is set in 135 acres (55 ha) of woodland, between Windsor and Heathrow. Around 200 species of shrubs, 150 different types of tree and numerous wild flowering plants can be found in RHC’s parkland. The nearest station is Egham. The campus is about 40–50 minutes from Waterloo station in central London about 19 miles (31 km) away, and Windsor is 5 miles (8 km). The campus is 2 miles (3.2 km) from M25 junction 13 and close to the M3, M4 and M40 and London Heathrow Airport.