SOAS is one of the world’s leading institutions for the study of Asia, Africa, and the Middle East.[5] Its library is one of the five national research libraries in the UK. SOAS also houses the Brunei Gallery, which hosts a programme of changing contemporary and historical exhibitions from Asia, Africa and the Middle East with the aim to present and promote cultures from these regions.

SOAS is divided into three faculties: Faculty of Arts and Humanities, Faculty of Languages and Cultures and Faculty of Law and Social Sciences. It is home to the SOAS School of Law which is one of leading law schools in the UK. The university offers around 350 bachelor’s degree combinations, more than 100 one-year master’s degrees and PhD programmes in nearly every department. The university has a student-staff ratio of 11:1, one of the best in the UK. The university has produced several heads of states, government ministers, diplomats, central bankers, Supreme Court judges, a Nobel Peace Prize Laureate and many other notable leaders around the world. SOAS is a member of Association of Commonwealth Universities. 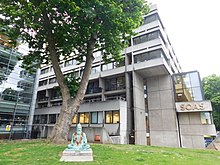 The campus is located in the Bloomsbury area of central London, close to Russell Square. It includes College Buildings (the Philips Building and the Old Building), Brunei Gallery building, 53 Gordon Square (which houses the Doctoral School) and, since 2016, the Paul Webley Wing (the North Block of Senate House). The SOAS library designed by Sir Denys Lasdun in 1973 is located in the Philips Building. The nearest Underground station is Russell Square.

The school houses the Brunei Gallery, built from an endowment from the Sultan of Brunei Darussalam, the leader of a country whose human rights abuses are ongoing,[26] and inaugurated by the Princess Royal, as Chancellor of the University of London, on 22 November 1995. Its facilities include exhibition space on three floors, a book shop, a lecture theatre, and conference and teaching facilities. The Brunei Gallery hosts a programme of changing contemporary and historical exhibitions from Asia, Africa and the Middle East with the aim to present and promote cultures from these regions.

The Japanese-style roof garden on top of the Brunei Gallery was built during the Japan 2001 celebrations and was opened by the sponsor, Haruhisa Handa, an Honorary Fellow of the School, on 13 November 2001.[28]

The school hosted the Percival David Foundation of Chinese Art, one of the foremost collections of Chinese ceramics in Europe. The collection has been loaned to the British Museum, where it is now on permanent display in Room 95.