St George’s is closely affiliated to St George’s Hospital and is one of the United Hospitals. 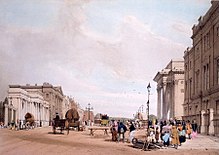 St George’s Hospital Medical School was originally established in 1733 as part of St George’s Hospital at Hyde Park Corner (now the site of The Lanesborough hotel), in central London. The medical school was relocated, together with St George’s Hospital to Tooting, South London in 1980. A joint faculty with Kingston University, the Faculty of Health and Social Care Sciences, has increased the variety of allied healthcare courses offered at St George’s, including Nursing, Physiotherapy, Paramedic Science and Radiography.

St George’s was the first institution in the United Kingdom to offer a four-year graduate entry Medicine degree based on the programme from Flinders University,[5] with which it has an exchange programme. The first intake was in 2000 with 35 students and the course has since been emulated by many other universities. Entry to the course is highly competitive with candidates being required to sit the GAMSAT as part of the application process.

In 2008, St George’s announced that it planned to merge with Royal Holloway to form a single institution within the University of London. The merger was called off in a joint statement by the two colleges’ principals on 25 September 2009. St George’s intends to keep working with Royal Holloway in the field of health and social care along with its well-established Joint Faculty with Kingston University. St George’s, Kingston University and Royal Holloway will continue to collaborate in the field of health and social care as part of the existing SWan (South West London Academic Network) healthcare alliance